A few days ago we received a large packet in the mail from Meta's legal team informing us that SimulaVR has been subpoenaed for their antitrust case FTC vs. Meta Platforms, in relation to the government's recent injunction against their acquisition of a VR fitness company. 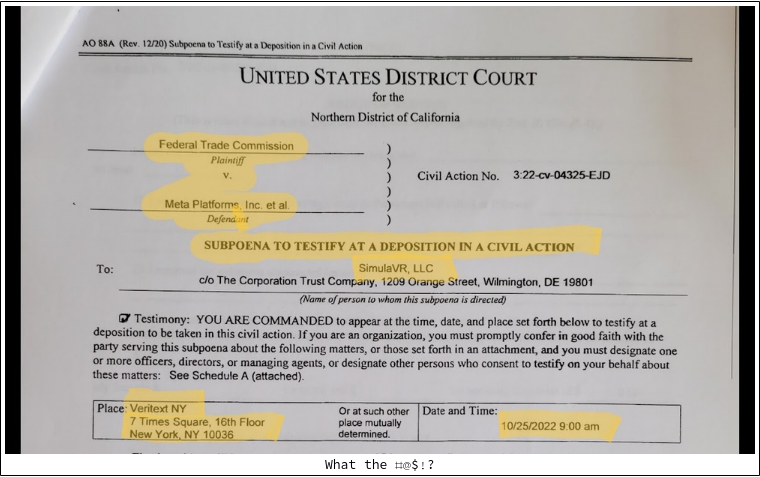 We've been given approximately 20 days to assemble a long list of documents for Meta's review, among them including:

We've also been commanded to drop everything we're doing and go tesify on these matters in person, thousands of miles away from us, by the stated deadline :|

This might not come as shock to anyone, but small startups like Simula can't afford the time and money to recruit legal defense teams to participate in highly involved antitrust cases, unlike the other parties who were subpoenaed alongside us: 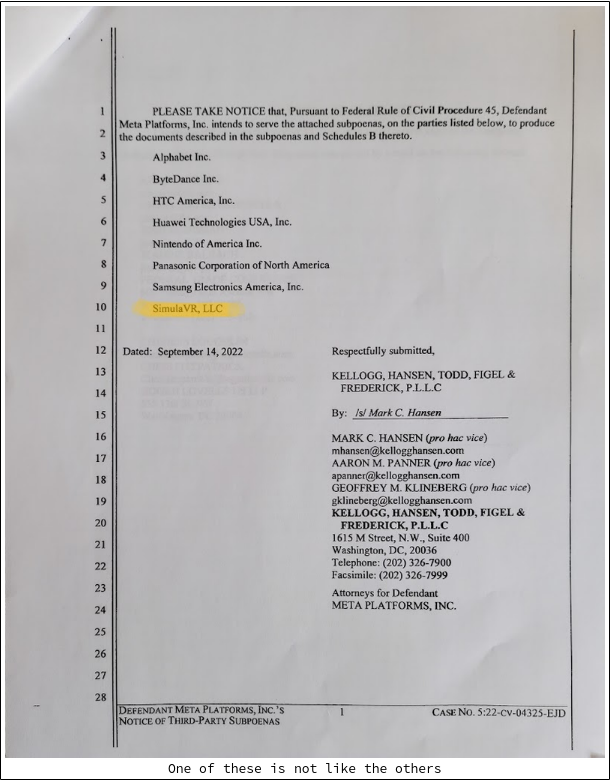 It's also just super strange to us that we would ever be considered against these much larger, more established companies. I seriously doubt we have much to add to this case. 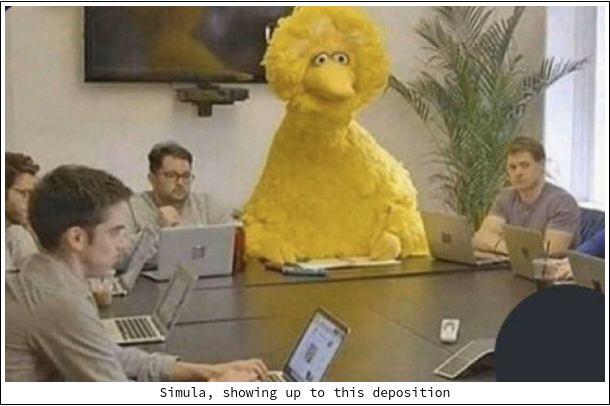 VR companies aren't the only people who have been hit by Meta's subpoenaes. There was a Bloomberg article that came out a few weeks ago ("Meta Seeks Out Secrets From Over 100 Companies to Win Antitrust Suit") reporting that non-VR companies have complained about being forced to hand over their business plans to Meta. We provide no comment on any of that.

In fairness to Meta

In fairness to Meta: the FTC is the one who initiated this fight, leaving them with the burden of demonstrating it isn't behaving "anti-competitively". So naturally, one of the primary (only?) things Meta can do to demonstrate this is to subpoena...well...its competition...to demand documents which might help them in court. So we understand their perspective; we just don't think small, unresourced startups are the ones they should call, nor do we view ourselves as their competition.

We don't view ourselves in competition with Meta

The truth is that we have no resentment or animosity towards Meta and its VR offerings; we just don't think they're as cool as what we're building. Meta sells reasonably good gaming headsets to customers who want to be entertained in VR; we're selling general-purpose productivity devices which are aimed at replacing PCs and laptops. So our real competition is laptops & PCs, not other gaming headsets.

From our perspective, Meta's headsets are as comparable to ours as early gaming consoles were to the Apple II: related technologies under the hood, but built for completely different purposes. Just as very few people used their Ataris to get serious work done in the 80s, we likewise believe few people will end up working very heavily in headsets primarily designed for entertainment.

We wish Meta the best, and hope they leave us alone.