We spend all day working on our PCs/Laptops, so if there really are benefits to working in VRCs, upgrading to one could have big impacts to our work productivity.

The Simula One headset is a VR Computer (VRC). To us, VRCs are a new category of computing device (alongside PCs & laptops) which allow people to get stuff done. While other VR headsets are more focused on gaming/entertainment experiences, ours is special built for productivity:

We hope to soon be living in a world where there are more VRCs than just Simula's. This post is meant to outline their benefits.

2 Why VRCs are better than PCs & Laptops 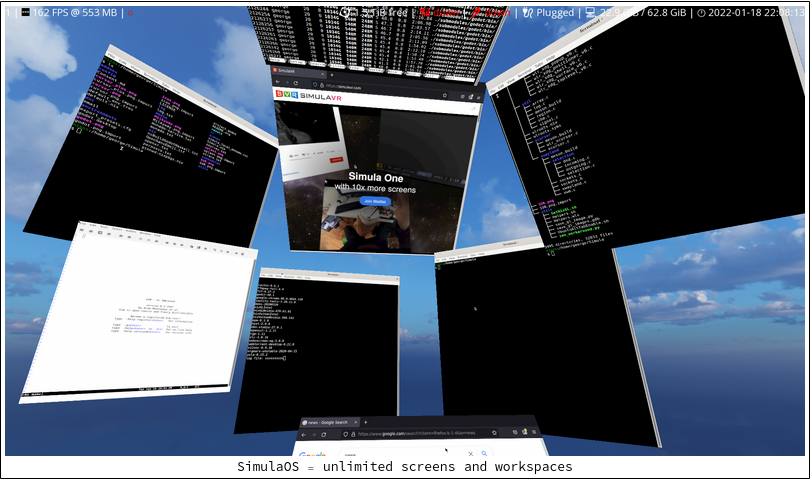 Have you ever tried to work exclusively on a smart phone or tablet for an extended period of time? The portability is great, and at first things feel doable, but after a while working on them becomes cumbersome and slow. Once you try a VRC, laptops and PCs will feel like phones/tablets: still useful for certain things, but less capable and productive.

VR provides 10x more space for you to place your applications and work views (e.g. in Simula, you can have a screen the size of a garage-door next to 15 smaller screens the size of book covers). Depending upon the task you're working on, this can have an accumulating impact on your productivity over time. Here are some examples of things that get considerably easier with unlimited screen real estate:

Have you ever noticed it's sometimes easier to work in a private office than it is a public area or high-distraction environment? VRCs allow you to take this one step further. No matter where you are, you can put one on, and it's just you and your work. VRCs are great for immersion in a way that's hard to describe until you try one for yourself. They're especially good for distracting work environments, and when you want to signal to you and your coworkers that you're "locked down and focused".[1] 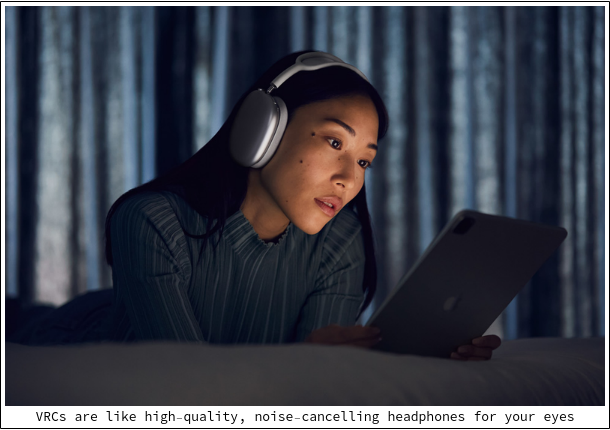 [1] Though of course sometimes you want to be able to see what's around you, and for those situations the Simula One provides an AR passthrough mode.

It's hard to take your multi-monitor PC rig with you to parks, coffee shops, or planes, but this is actually possible with VRCs. 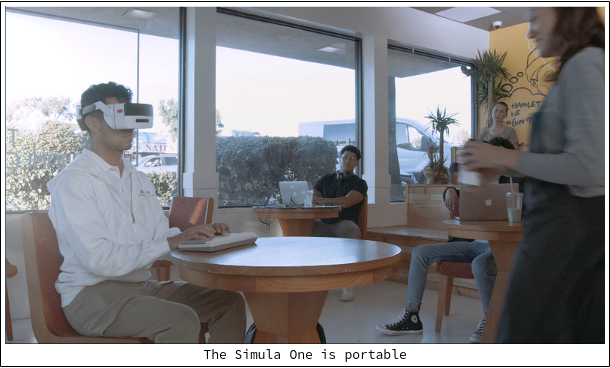 2.4 VRCs are even usable outdoors

VRCs avoid laptop screen glare, and are usable even when it's sunny outside.[2] 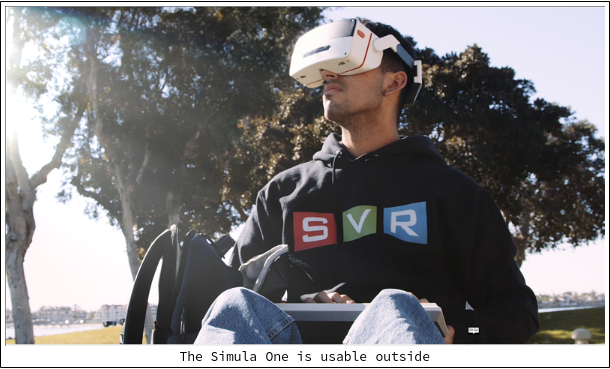 [2] Disclaimer: it's still very important to be careful when using Simula's AR mode, especially when moving or outdoors. While AR passthrough is designed to give an accurate view of your surroundings, distortions are still possible and your depth perception might be impacted.

Ever tried to get something done in an airplane or train car? It can sometimes just feel weird working on sensitive things out in the open. VRCs allow you to work privately, knowing that other people can't snoop over and see any sensitive info on your screen: 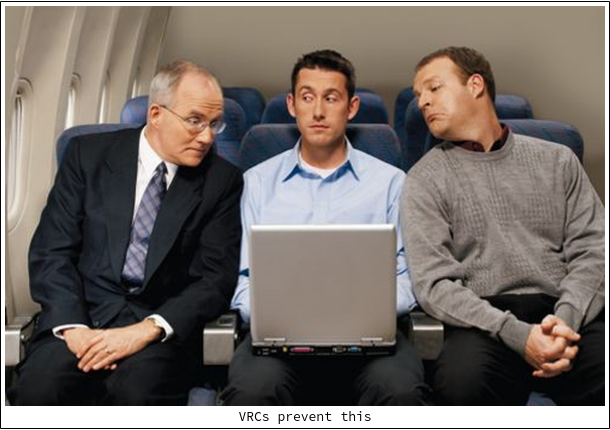 With a VRC, you can remove your monitors and their cords from your desk, improving space for a cleaner/more minimal office. 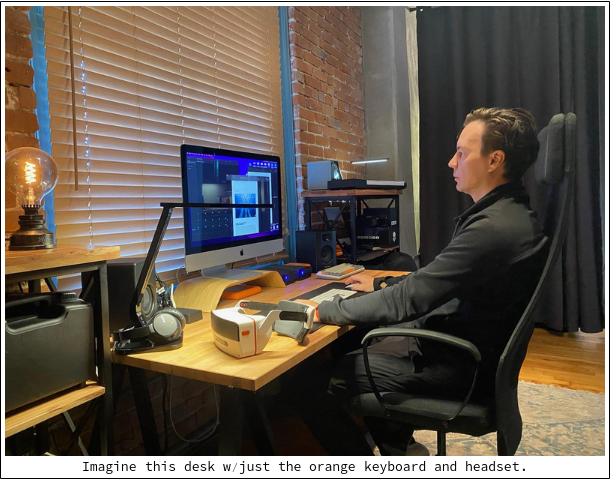 In fact a great setup with the Simula One is nothing but a portable bluetooth keyboard and a swivel chair. 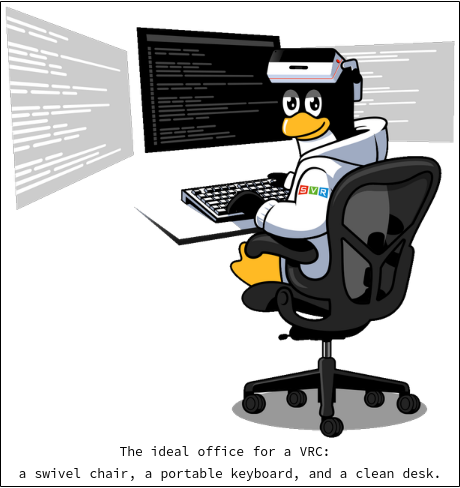 Laptops and monitors force you to keep your body oriented in the same position for several hours a day. Often times this promotes bad back and neck posture. 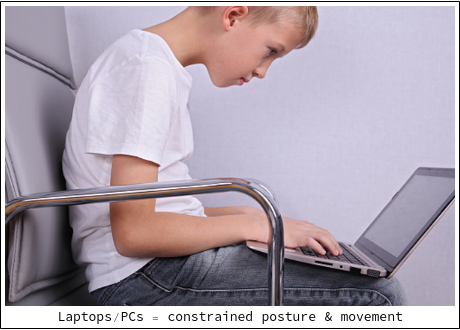 Simula, on the other hand, gives you the ability to move windows or even your entire workspace around at will, allowing you to change positions and achieve more ergonomic working stances throughout the day. You can even experiment with supine computing without purchasing any expensive desk setups. 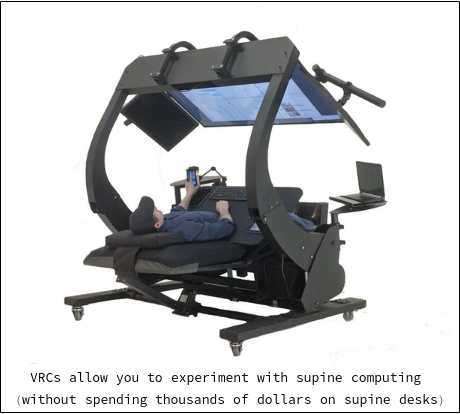 2.8 VRCs allow you to compute while standing (and even walking)

Often our best ideas come to us while standing or pacing around, and VRCs allow you to keep your full desktop on during these moments. If you're interested in walking while computing, the Simula One supports an AR passthrough mode which can you help you navigate your surroundings while walking.[2][3] 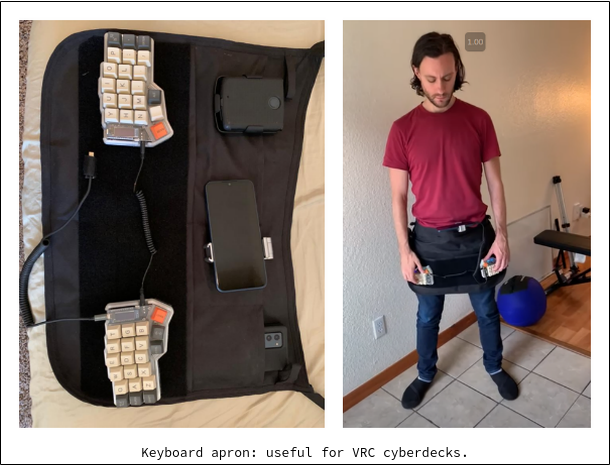 We have also built an experimental "Keyboard Apron" which can help you walk while you compute. We are thinking about adding this to our Kickstarter, so let us know if this interests you!

[3] If Simula's campaign exceeds a high enough threshold, we plan also to add a halo strap mechanism which allows the headset to "flip up" while still being worn (also useful when navigating the real world).

3 Why VRCs are better than gaming VR headsets

One way to get your feet wet in VR office is to tether a gaming headset to another PC/laptop (either via cords or over WiFi). This requires you to then run a VR window manager on the host machine (e.g., Simula) or use a monitor emulator (e.g., Immersed). This section discusses the relative weaknesses of this approach versus using a VRC.

Of course the main limitation with this approach is that cord tethering limits your portability and adds friction to get yourself working in VR. Cords are just really annoying to deal with. 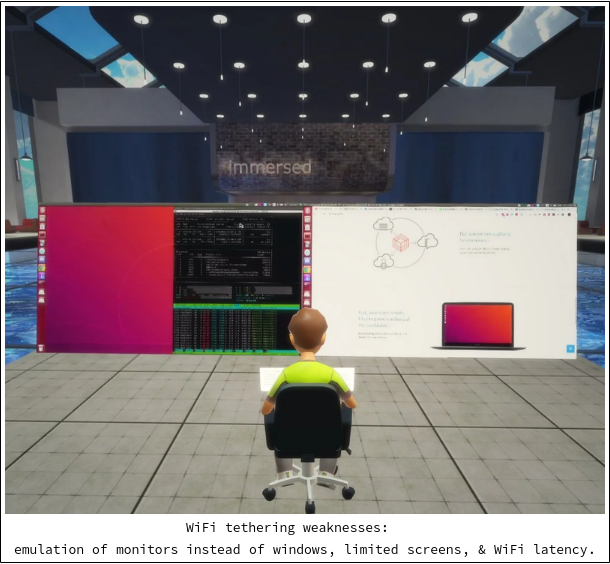 The other approach to VR window management is emulating monitors via wireless tethering. For example, the Quest 2 provides an app called Immersed which allows you to connect to a PC/laptop over WiFi and emulate a limited number of monitors. Problems with this approach:

3.3 VRCs have the highest PPD, and are optimized specifically for text rendering

The Simula One is optimized from the ground up for VR computing, both at the hardware and software levels. This gives it a huge advantage over gaming devices:

4.1 VRCs are focused on VR computing, instead of other agendas 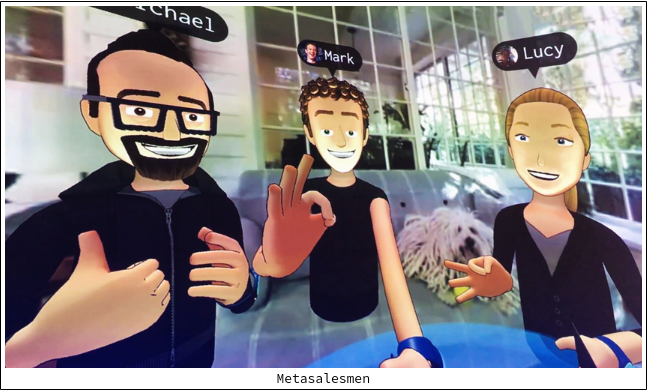 VRC companies can be 100% focused on productive VR computing, and maintain their independence from other ecosystems (e.g. social networks or gaming platforms) which have different agendas.

4.2 VRCs will help create a market for office-focused VR/AR apps

When Simula was founded, most people thought that the future of VR was in gaming and entertainment, but we've always been more focused on VR as a platform for intelligence augmentation, office work, and productivity (a "Tool for the Mind"). Our long-term ambition is to help create an ecosystem for VR office applications. But this is only possible if enough people are computing daily in VRCs to begin with. 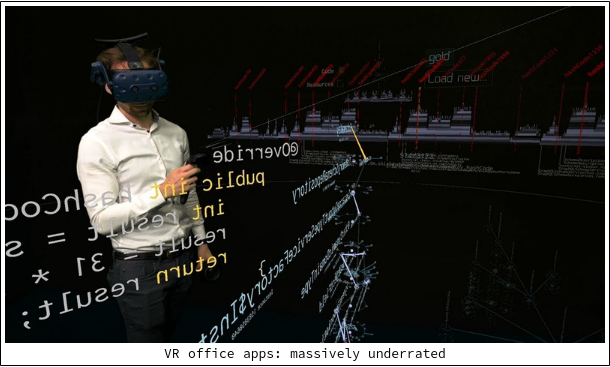 The more VRCs are in circulation, the more possible it becomes for us and other developers to help make these intelligence augmenting applications a reality.

Despite an enthusiastic fanfare, Linux Desktop still remains a niche OS, accounting for about 2% of the PC market. Nevertheless, Linux is often thought to be a superior OS, due in part to the following factors:

The rise of VR computing provides an opportunity for Linux to become dominant. In 2006, most people believed that Windows was destined to control the mobile market, but an obscure Linux-based OS named Android (running on premium phones like the T-Mobile Sidekick) beat them handily! We believe that something similar could happen in VR computing, but it will only be possible with the right group of early enthusiasts helping Linux VR get there early. 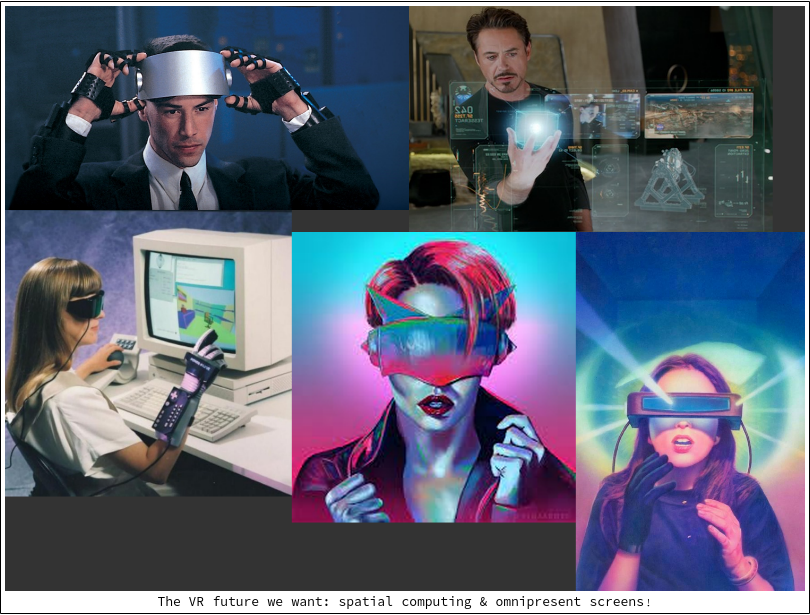 From Iron Man to The Minority Report, our Sci-Fi has been for years promising us a future of spatial computing and omnipresent screens. Our mission is to finally allow cyberpunks to hack in VR across the developed world. The Simula One can help a small number of early backers take us one step closer to this future!

5 How to get your own VRC

Simula's VRC is available for preorders in our recently opened store.