In 1991, before embarking to work on his early FPS game titles, John Carmack spent $11,000 ($23,219.85 inflation-adjusted) on a NeXT workstation. The story of his purchase is chronicled in Masters of Doom:

On a cold winter day, Carmack laced up his shoes, slipped on his jacket, and headed out into the Madison snow. The town was blanketed in the stuff, cars caked in frost, trees dangling ice. Carmack endured the chill because he had no car; he'd sold the MGB long before. It was easy enough for him to shut out the weather, just like he could, when necessary, shut Tom and Romero's antics out of his mind. He was on a mission.

Carmack stepped into the local bank and requested a cashier's check for $11,000 [$23,219.85 inflation-adjusted]. The money was for a NeXT computer, the latest machine from Steve Jobs, cocreator of Apple. The NeXT, a stealth black cube, surpassed the promise of Jobs's earlier machines by incorporating NeXTSTEP, a powerful system tailor-made for custom software development. The market for PCs and games was exploding, and this was the perfect tool to create more dynamic titles for the increasingly viable gaming platform. It was the ultimate Christmas present for the ultimate in young graphics programmers, Carmack. – Masters of Doom, pg. 93

Carmack went on to use his NeXT Computer to create Wolfenstein 3D, Doom I & II, and Quake – a pretty good return on investment, to say the least. 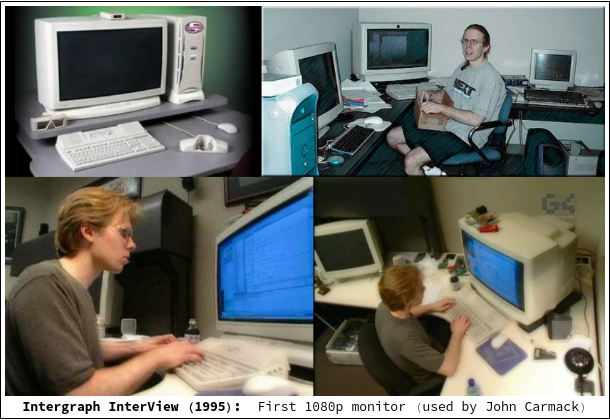 The pattern continued: in 1995, Carmack spent $9,995 on one the first 1080p monitors: the Intergraph Interview 28hd96. This monitor was gigantic, but the extra screen space and image quality surely came in handy during the creation of the Quake trilogy. It provided a 28" screen with 1920x1080 @ 85Hz, a resolution not unheard of on today's hardware. Essentially, Carmack was able to trade $9,995 of 1995 money for a monitor that put him decades into the future.

[1] According to the Steam Hardware Survey, more than half (67.24%) of computers run at at this resolution.

2 The risks of early adoption 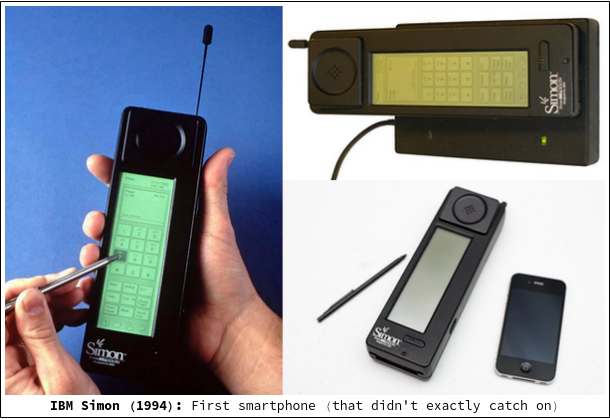 Early adopting new things is usually both expensive & risky. Many "first-of-a-kind" products look both anachronistic and off the mark in retrospect (ex: the Apple Newton, or early "brick" cell phones like the Motoral DynaTAC) . First-of-a-kind products are sometimes abandoned after early release, or aren't made mainstream until several years later (ex: early tablets and smartphones). Most of all, they're expensive to make, and are usually priced far above their long-term equilibrium costs after economies of scale and consumer demand kicks in.

But sometimes early premium products are immediately & immensely useful (ex: John Carmack's NeXT Computer & 1080p monitor), and/or even recognizable as the useful starting point for lineages that still continue today (ex: ThinkPad 700 series). In these cases, being the first to purchase something new can be more than worth the money (even at early adopter prices). They can essentially place you several years ahead of your peers in terms of computing capability.

In this post, we review some historic computing innovations, and report what they cost at the time to early adopters (inflation-adjusted). We discuss why fewer people today seem to pay top dollar for ultra-premium workstations, and of course end with a plug for the Simula One :P

LISP machines were the first single-user, ultra-premium workstations. They brought technologies literally decades ahead of their time to market: high-level language computer architectures (LISP), garbage collection, window management, laser printing, computer mice, high-resolution graphics, and networking. Before that, they were available in academic labs, on which people like Richard Stallman and Guy Steele developed software like EMACS. 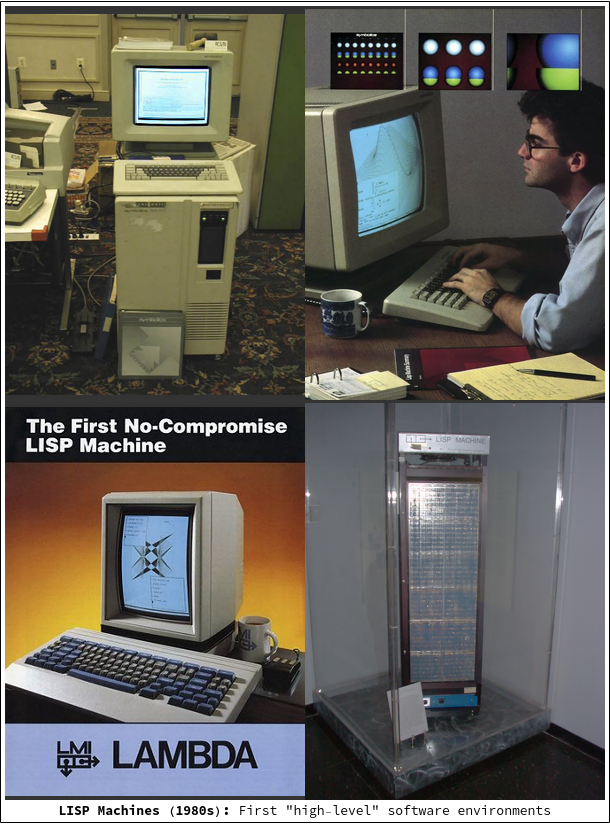 The first model to reach commercial availability was the Symbolics LM-2, which cost a whopping $70,000 ($244,238.83 inflation-adjusted); however, many other companies sold LISP machines throughout the 80s. 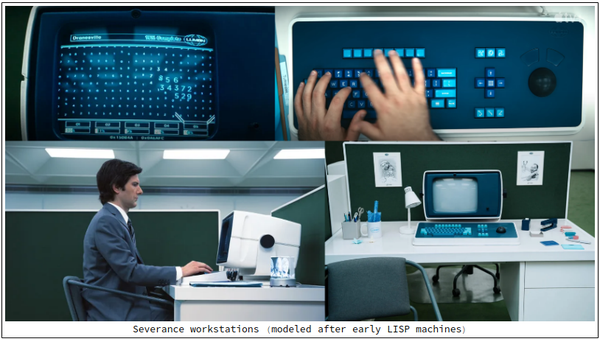 They're modeled off of Data General's "Dasher" LISP workstations: 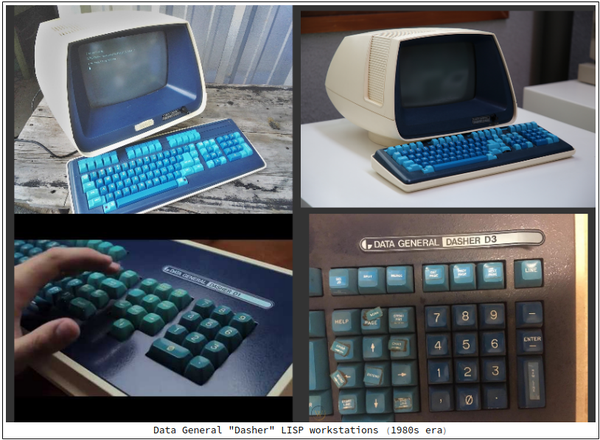 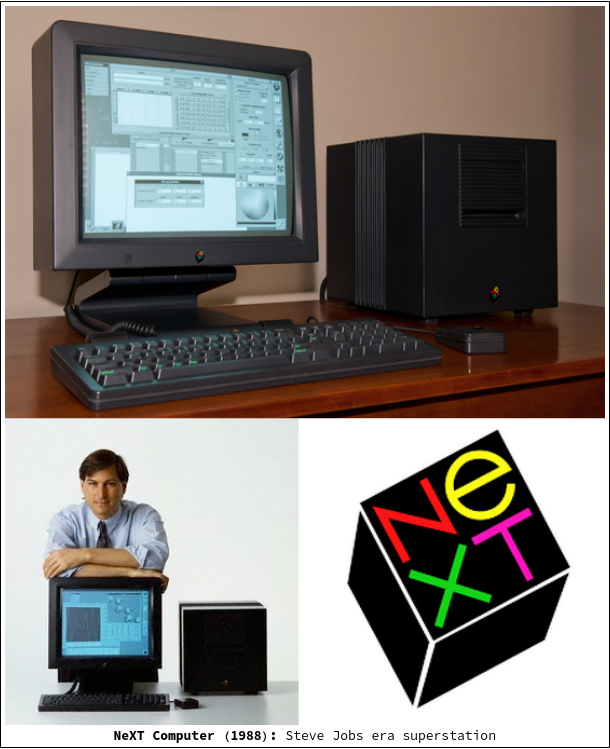 As mentioned in the intro, John Carmack famously used a fully loaded NeXT Computer to develop Wolfenstein 3D, Doom I, Doom II, and Quake.

SGI workstations were ultra high-end computers sold throughout the 90s, and were used by developers to create some of the earliest 3D gaming classics. 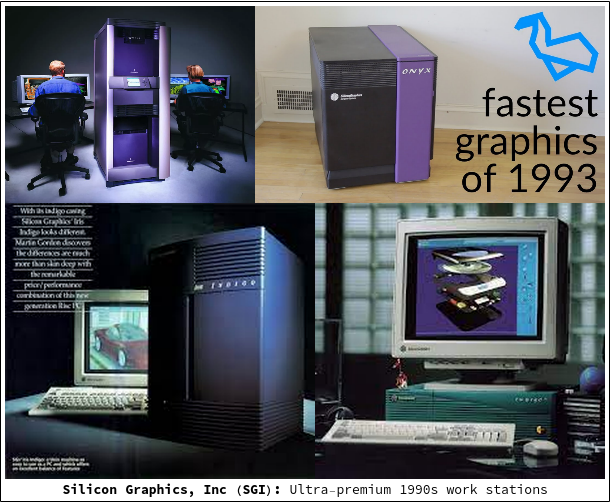 "In the beginning, we were probably working ten hours a day, but by the end, far in excess of that." GoldenEye would be built on the Silicon Graphics Onyx – a $150,000 computer roughly the size of a small refrigerator. At the time, it was the closest approximation to the performance of Nintendo's upcoming "Ultra 64," which would eventually become Nintendo 64. "You can see, it's a very large box – it wouldn't fit under every desk – and it emitted huge amounts of heat, [had] four graphics cards and it was not that reliable."

In addition to Goldeneye, the SGI Onyx was used to develop Super Mario 64, Legend of Zelda: Ocarina of Time, Final Fantasy VII, and Donkey Kong Country. 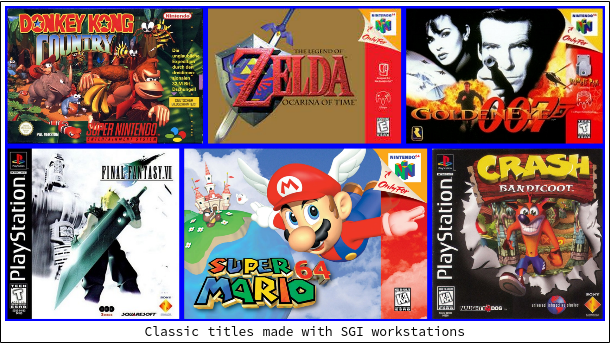 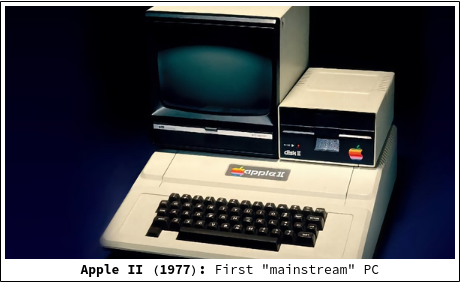 The iconic Apple II was arguably the first "mainstream" Personal Computer: small, reliable, and convenient to use. It also had the defining feature of being able to display color graphics. Original price: $1,298 ($6,158.09 inflation-adjusted).

Weighing at 9 pounds, the Gavilan SC was the first computer to ever be marketed as a "laptop" in 1983. 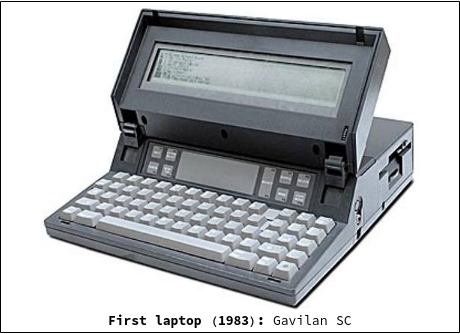 It cost $4,000 ($10,882.73 inflation-adjusted), and was described by BYTE magazine in 1983 as "a traveling professional's dream come true, [promising] to set new industry standards, not only for truly portable computers, but also for integration of applications software". The laptop was equipped with a floppy disk drive and 300-baud modem, ran MS-DOS, and even had a compact printer attached to the rear of the machine(!) as an option. We imagine this must have been pretty astonishing in 1983. 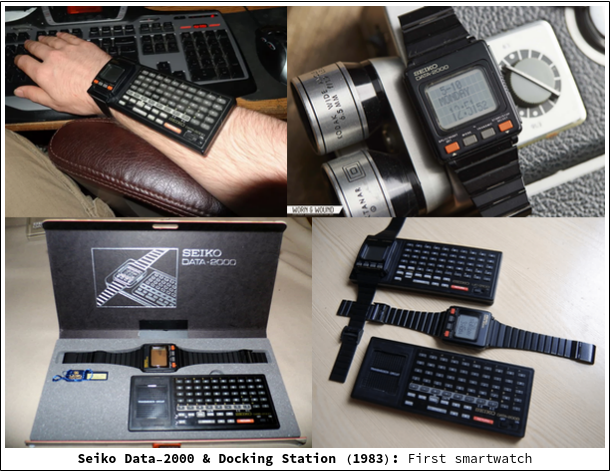 In practice, you could use it as a handheld calculator and a place to store memos and appointments. It's full set of features included an attachable keyboard, programmable calculator, Microsoft BASIC interpreter(!), Japanese to English translator, and a wireless docking station (synced via electro-magnetic coupling). The Japanese advertisements for the Seiko Data 2000 were particularly aesthetical: 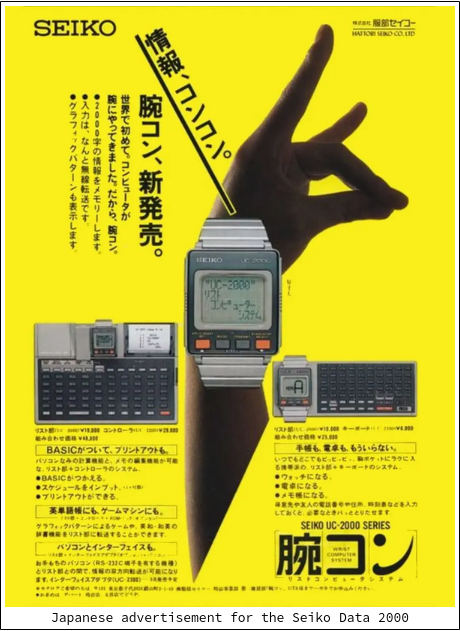 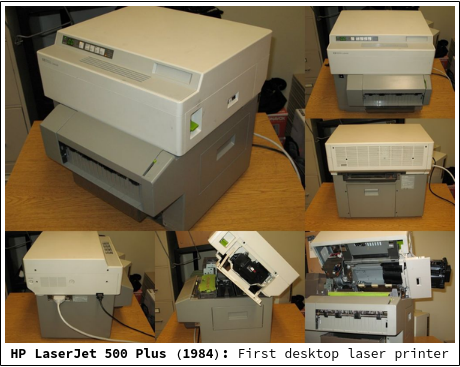 A year later, Apple released the first printer with built in PostScript interpreter and WSIWYG publishing for $6,995 ($18,690.43): 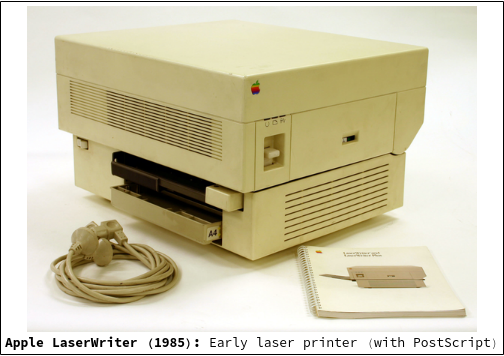 Weighing 4.5lb and featuring a 10" monochrome screen, the GRiDPad is regarded as the first commercially successful tablet. It originally cost $3,000 ($6,955.74 inflation-adjusted). 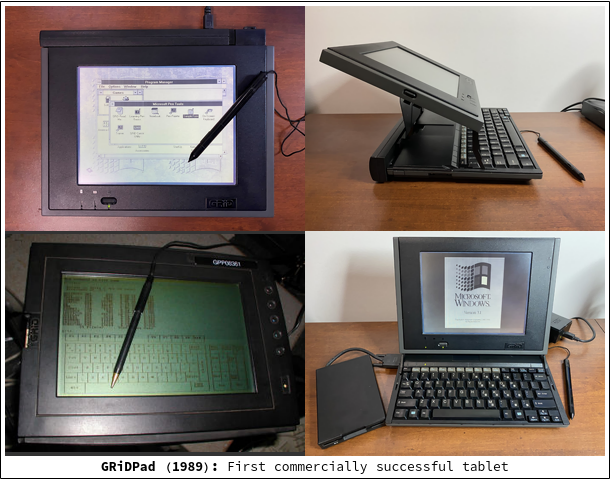 The first commercially available cable modem was provided by LANcity. The modem offered speeds up to 10Mbps (which must have been absolutely breathtaking for 1990) and cost $18,000 ($39,595.04 inflation adjusted). 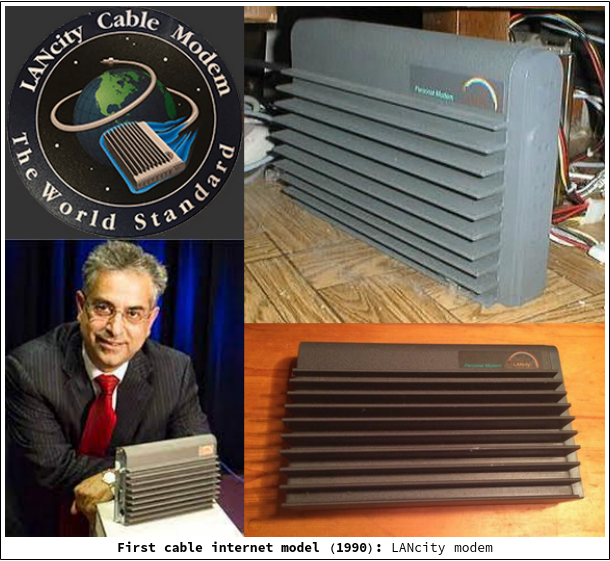 Another popular (but also very expensive) option for faster internet in the 1990s were T1 connections. For reference, here's a fun clip of Joe Rogan recounting how he used to spend ~$10K/month in the 90s to play Quake on the internet without dialup connection lag.

Technically, the commercial first hard drive to reach 1GB of space was the IBM 3380 (released in 1980); however, this earlier form factor was the size of a refridgerator, so not really accessible to actual PC users. It cost $97,650 ($340,713.17 inflation-adjusted). 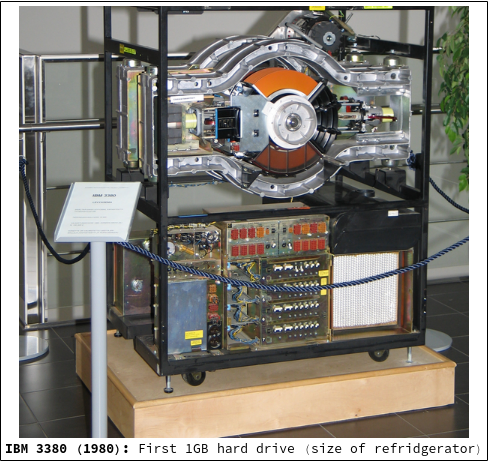 The IBM 0663 Corsair (1991) was the first small form factor hard drive to have more than 1 GB of space. Unfortunately, I am unable to track down either its price or a photo of one. A reasonable estimate based on the cost of other hard drives at the time though is $1,000 ($1,989.65 inflation-adjusted).[3]

The ThinkPad 700C ("C" standing for "Color") was among the first color notebooks ever commercially released.[4] It was initially obtainable for $4,350 ($8,914.06 inflation-adjusted), included a docking station, and up to a 4 hour battery life. It also featured the first instance of ThinkPad's iconic red rubber "TrackPoint". 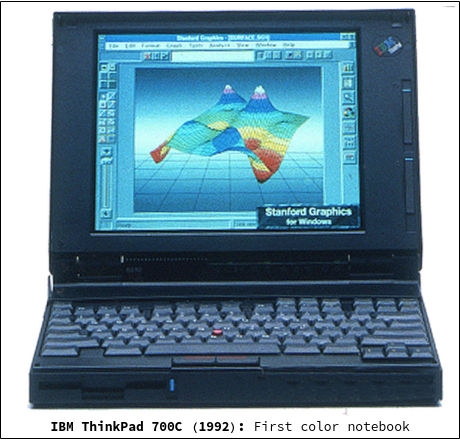 [4] Dell claims to have launched the first color notebook powered by batteries in 1991; however, I am unable to find much info about the model or its price on the web, so am using the ThinkPad 700C as a stand-in.

The Apple Newton was the world's first PDA and (arguable) precursor to the iPhone. It released for $900 ($1,844.29 inflation-adjusted) in 1993, and was a market flop. Steve Jobs famously hated the Newton since it required the use of a stylus. He discontinued it after returning as CEO in 1997. 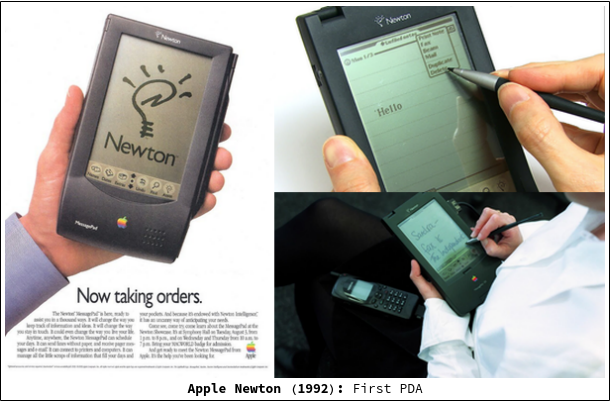 This was one of the commercially available 28" 1080p CRT monitors, supporting a max resolution of 1920x1080 (still the most widely used monitor resolution today, 27 years later). John Carmack famously used this monitor to help create the original Quake – perhaps because it allowed him to keep more windows in front of his eyes while programming. It cost $9,995 (inflation-adjusted $18,855.66).

Judging by this YouTube video, it looks like Carmack was using this monitor all the way up through the development of Doom III.

It's discussed here in /r/retrobattlestations.

The iconic Apple iPhone hit the market in 2007 for $499 ($691.92 inflation adjusted), a launch price which Steve Balmer famously critized after its launch. While $499 isn't cheap, it's still a ridiculous bargain when compared to all of the "first-in-kind" tech that preceded it. 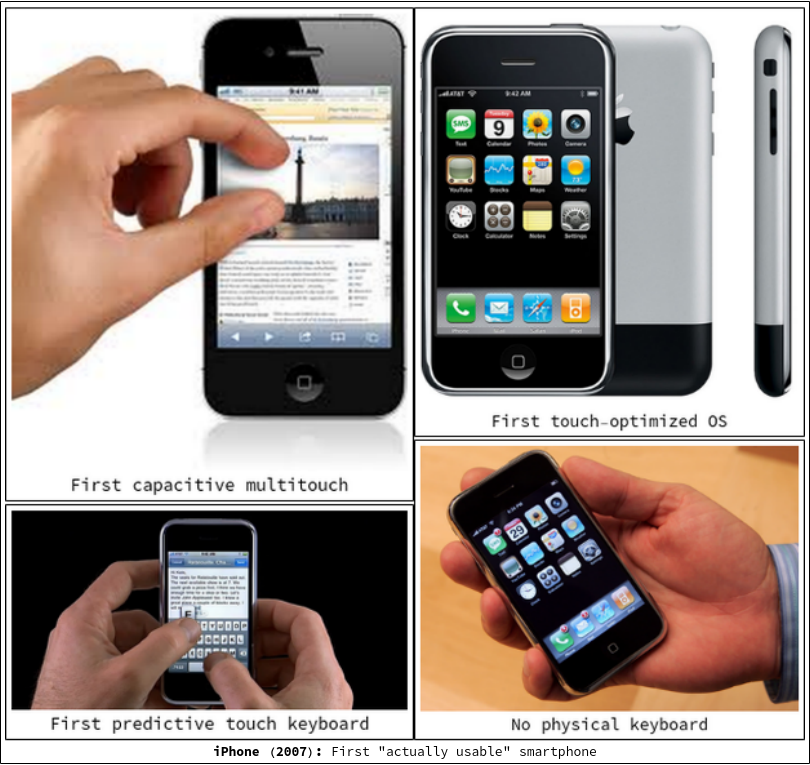 While the iPhone wasn't the first PDA or smartphone, it was arguably the first "usable" one. It featured a massive 3.5" screen which was unencumbered by any physical keyboard. Apple was able to strip the keyboard by designing the world's first "actually usable" touch type keyboard (with predictive typing capabilities). The iPhone also didn't force users to carry a stylus; instead, it had an OS designed from the ground up to support finger input. The iPhone also provided the market's first capacitive multitouch screen, which allowed for intuitive pinch and zoom gestures. These innovations, combined with its reasonable price, made it easily the most iconic and successful product of the 2000s. 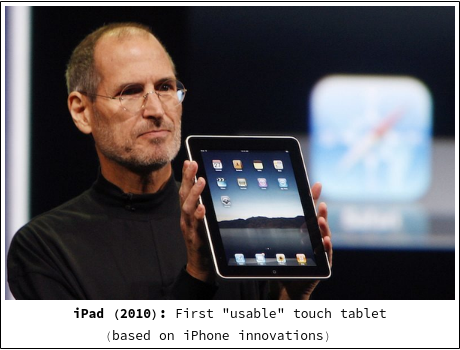 It featured a 9.7" multitouch screen with 1024x768 resolution. Unlike other tablets, it didn't require the use of a stylus. Instead, everything was optimized for finger touch input. It also supported cellular data plans, which gave it wireless access to the internet on the go.

The Pebble Smartwatch was released in 2013 for $99 ($122.18 inflation adjusted). Much like the iPhone & iPad, the Pebble represented a major milestone in smartwatch usability. 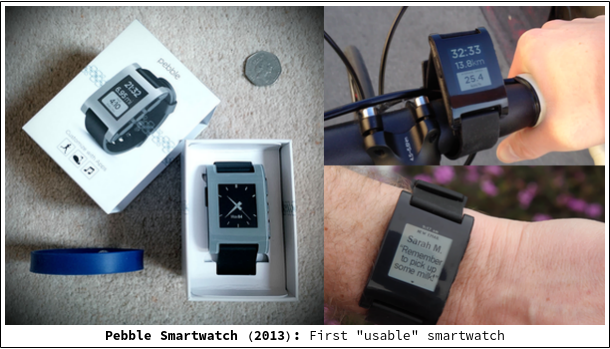 To what extent do early adopters trade cash for bleeding edge workstations today? While certainly not unheard of, it seems not as common as in the past: