The Simula One will feature two front-facing RGB cameras for its AR Mode:

2 Why two cameras are required instead of one

First off: why are two cameras required instead of one? Wouldn't one front-facing camera be simpler and save on bandwidth and cost? The answer is due to parallax: 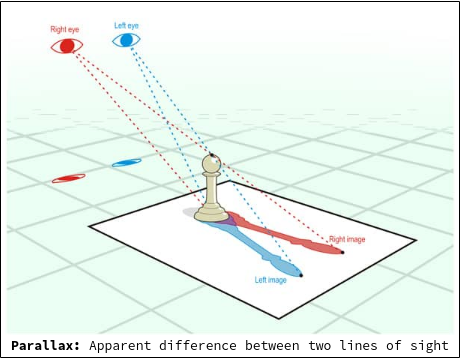 Parallax is the difference in the apparent position of an object viewed along two different lines of sight. If your brain doesn't see parallax simulated in VR, it gets seriously disoriented. 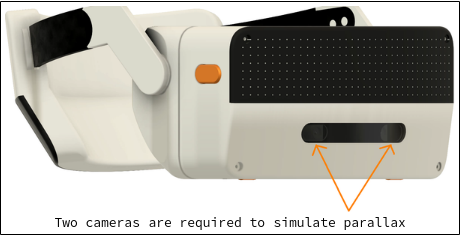 This is why when an image of a scene is rendered inside your headset, there are actually two slightly different images displayed for each eye: the right-eye image is offset slightly to the right, while the left image is offset slightly to the left. When it comes to simulating AR Mode with front-facing cameras, the parallax requirement doesn't change! This is why two cameras must be attached to the front of the headset: one for each eye, slightly offset from one another.

We have not made a selection of our actual camera module yet, but our requirements are roughly:

3.1 Comparing our camera specs to other VR headsets

Since VR computing is our exclusive focus, and VR computing requires a good AR mode, we are pushing a bit harder on our camera specs than some other VR headsets.

Many other VR headsets (e.g. the Varjo Aero) don't even come with cameras.

In our spec table we mention we prefer "global shutters". The distinction between a global and rolling image sensor is in how it grabs image data. 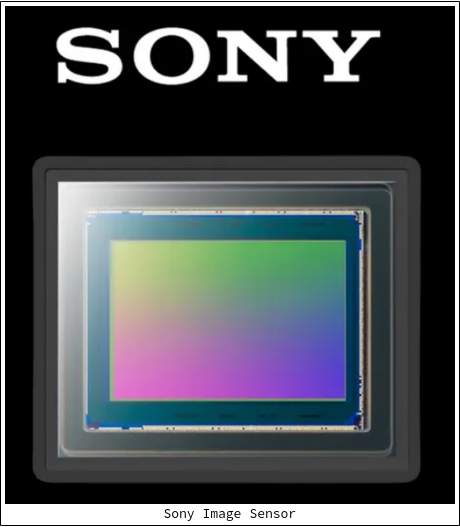 Our two image sensors under consideration are both Sony image sensors, differing primarily in their shutter type:

At this point we prefer the Sony IMX547, since it has the global shutter type.

4.1 Next steps: evaluating the the IMX547 for optical performance

Our next steps for camera evaluation involve two phases: 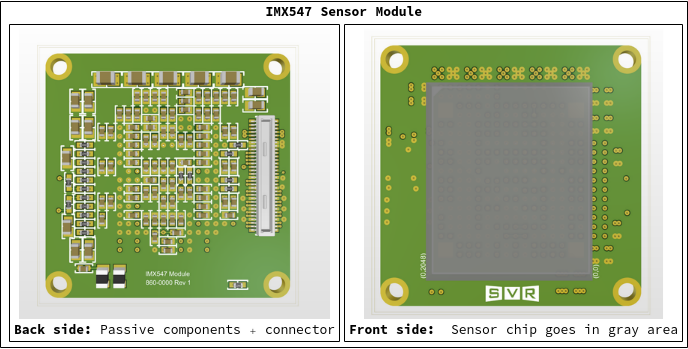 Using this sensor module, the data flow inside our headset will look roughly as follows:

In this system, light passes through the lens and into our image sensor, which is then passed into our image processing FPGA (via the "SLVS-EC" protocol) for demosaicing. Afterwards the processed image data is passed via PCI Express to our NUC, where our VR compositor will finally be able to process the image and show it in the appropriate eye when AR Mode is activated.

In this data flow, our primary bandwidth bottleneck is the PCIe connection between the FPGA and the NUC. Here we are using a PCIe x4 (Gen 3) connection, which can pass data at a speed of 35.5 Gb/sec.

We mentioned above that image data is passed from our image sensor to our FPGA for "demosaicing". What exactly does this mean?

Under the hood, an image sensor (like the Sony IMX547) contains a grid of non-overlapping Red, Green, and Blue photosensors. As light hits the sensor, each of these photosensors only detects its corresponding color (red, green, or blue). This means the image sensor lacks complete color data in every node, which necessitates further image processing (in our FPGA) to interpolate the missing color details.

As can be seen above, an (e.g.) "red" node in the sensor lacks "green" and "blue" data. To fill in for the missing color data, a process called "demosaicing" has to be undertaken, which interpolates the unknown color data for each node. 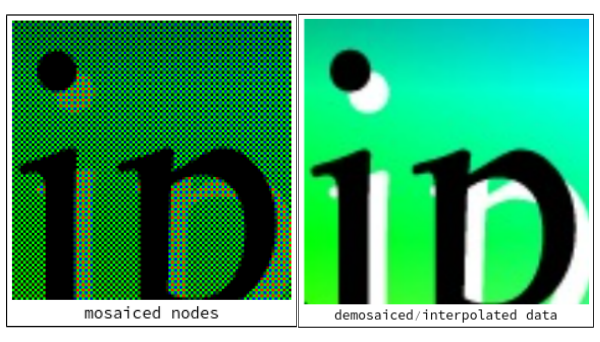 The end result is a recognizable image with full color data in every pixel.

The final issue to discuss is camera latency. According to an early VR article by John Carmack:

Human sensory systems can detect very small relative delays in parts of the visual or, especially, audio fields, but when absolute delays are below approximately 20 milliseconds they are generally imperceptible.

A total system latency of 50 milliseconds will feel responsive, but still subtly lagging.

We won't actually know what our camera latency will be until we test our assembly, but a rough calculation shows that we're at least in the running for a ≤20ms camera latency:

The assumptions we make to get here are pretty in the weeds, but if you're interested, here they are:

Conclusion: Rounding everything up to the nearest millisecond, we can put these together into a coarse latency calculation which implies an AR Mode camera latency of ~15ms.